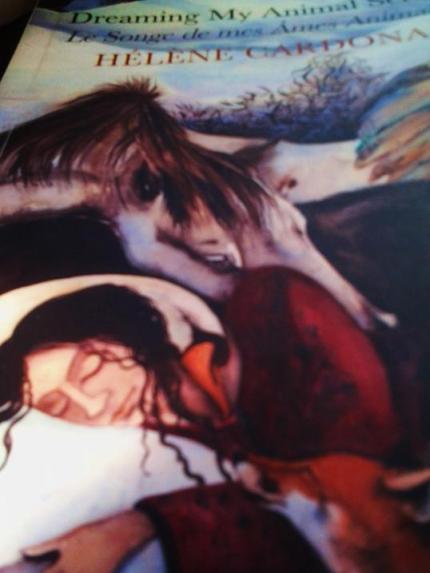 Reading the biography at the end of Hélène Cardona’s Dreaming My Animal Selves/Le Songe de mes Âmes Animales (Salmon Poetry, 2013) we find that she is a citizen of three countries, with accompanying languages (United States, France, Spain (but also fluent in German, Italian and Greek)), that she has taught both French and Spanish, translated Baudelaire and Rimbaud as well as her father, Jose Manuel Cardona, and holds a Master’s in American Literature.

We find that, besides being a teacher and poet, she is an actor, having starred in movies such as Chocolat and Happy Feet 2.

We find that for the movie Serendipity she also wrote and sang the song Lucienne.

In other words, a citizen of the world.

In other words, the kind of shameless over-achieving stuff that makes one human being hate another human being with hopeless furious jealousy.

It is a book that, as you can probably tell by its title, is bilingual. French and English versions of poems sit side by side.

Here is a random list of things that I like about this book or that this book made me think of:

1. That the book was originally written in English and then translated to French.

2. It is a book that reads like a collection of dreams and the French versions (I can’t read french) makes it even dreamier. Like the flipside of dreams that are foggy strange landscapes that you can only sense in the corner of your eye but which take off as soon as you try to focus on them.

3. There are many fairies in this book. I like fairies.

6. I like to think of poets as animals, the way this book makes this possible, in that hazy early morning in-between-ness where things blur.

9. The poems kind of read like they were written by someone who sleeps for a long time and then wakes up for a few minutes every day and jots down whatever was last in memory so as to not forget. These notes are then fleshed out into poems.

10. The poems also have about them that feel of childhood magic, fairy tale, fall down the rabbit hole, peculiar, dancing to their own logic. This is a good feeling. Dreams and childhoods seem to share edges.

11. The Fairies again? Did I say Fairies?

12. This line about Anna Akhmatova (another poet/fairy/animal):

“Anna Akhmatova unleashes
all the water inside me
and I expand again.”

14. The looming doom of growing up.

15. One could say it is in a way a “romantic” collection of poems. This seems fair. Inspired by a romantic view of poems. The poems are shapely, mostly contained, structured creatures, that believe in super poetry.

15. This is a sort of ideal that seems to see poetry as something that reflects something else, Platonic shards gleaming in the summer grass, receptors of some divine light or hidden interiority, like the leftovers of dreams, jotted down in haste, should correspond to the big dream-dream, the ultimate perfect dream-dream.

16. It is therefore of the essence that each shard be polished just so as to make the best possible reflection.

17. But I would say that these poems shine the most and brightest when they momentarily dispatch from the Great Big Dream and make a case (perhaps selfishly) for their own beauty, their strange ownness. Seduced by their own rhythm and repetition, some wild images, interesting unknowns are hatched.

20. This is probably a philosophical question of many dead ends on which we can disagree.

21. In one poem Van Gogh is being distinguished from Chagal. In another poem a giraffe is seen perched on top of an elephant (or the other way around?). I like images like this.

22. The romantic, inevitably, when pushed, it seems, enters the baroque, the grotesque. I guess maybe what I’m saying is that I would have wished more poems in this book had landed on this side. Less tempered, more obsessed.

23. It should be said though that it is a collection of poems written with a terrific sense of music.

Check out www.helenecardona.com for more info.