The scene at the National Arts Club, when Gramercy Arts High School students read poetry last month for an event long anticipated by the New York Browning Society heralds the victory of the feminist’s battle for equality in the literary world.  One young man and five young women read poetry inspired by Elizabeth Barrett Browning and Robert Browning, who were 19th century naturalist poets.  A couple of the poems they looked to for inspiration were Elizabeth Barrett Browning’s “A Child’s Thought of God” and “A Dead Rose.”

The second is significant in this case because it describes a flower changing over time:  its sweetness, color, wetness, and odor. 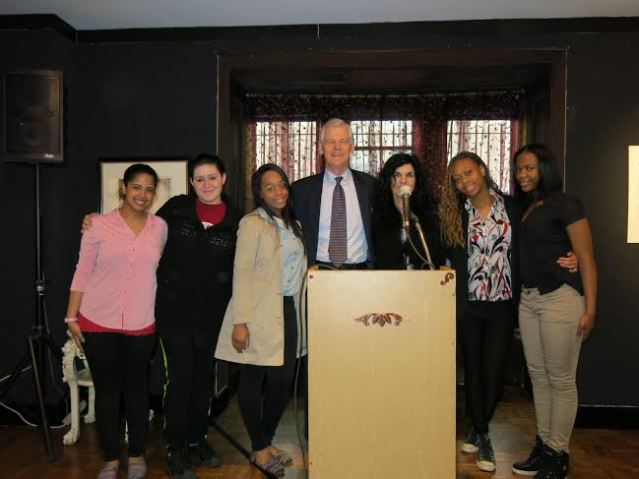 Before the event, Glenda Cannell, the students’ English teacher posed for a photograph with Stephen Downey, President of the New York Browning Society, and Roberto Zelaya, Kelice Charles, Nycole Morales, Maya Alvarez, Diamond Jackson and Ajane Gill.  The event took place in a small downstairs room with a tiled mosaic fireplace and the collection of Picasso the Printmaker: An Intimate View gracing the walls. 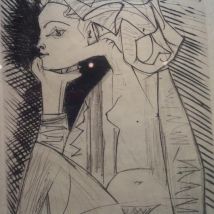 Elizabeth Barrett Browning was remarkable because she received extensive instruction in languages at a time when British universities did not accept women.  To the extent these high school students illustrate the current trend, the problem has nearly been reversed:  at the club event, women outnumbered men five to one.

Instead of speaking in abstract terms, their poems tended to be florid and emotional.  The thread that united many of the compositions was blood.  Symbolically, and only symbolically, the event represented a final stage of Gail Chester’s Radical Feminism.  Chester and Mary Daly thought language had to be redefined and correct spellings substituted for incorrect ones for a real women’s emuncipation.  The Female Supremacists war for liberation has been won; the times past when women had to accept a male pseudonym in place of their own name or disguise their feminine identity by writing anonymously.

A line of Ms. Gill’s “My Forsaken World” nicely touched off the theme of the day, “For I am forever bleeding the feelings of my long lost love.”

Mr. Downey, who moderated, cautioned the students, “You do not read the line; you read to the comma or the period.”

Along the vein of Ms. Gill’s work, Ms. Jackson’s “Deleted Memory” and “The River of Blood” could obliquely be interpreted to describe the conditions of women’s heroic fight for recognition like a battle field where life drains from the bodies of revolutionaries.  “The river of blood is now coming after you.  Now you think about the pain.”  She had a firm grasp on the principle of poetic meter and was able to pull her ideas into a form that encompassed it.

Mr. Zelaya was caught up in the slowness of the Browning’s longer works.  His writing struggled for a traditional esthetic norm and departed from the revolutionary theme.  He followed in the general pattern of the reading by writing one poem modeled upon the Brownings and reciting one canonical piece by Robert Browning.

Ms. Charles read a strident, rambling poem, “Life,” about a nine year-old cancer patient who “doesn’t let obstacles bring her down.”  She wrote about the mental difficulties a child had to overcome while sick in a hospital bed.  “No winning, no losing, just a temporary smile.”  For a young person, cancer raises psychological problems of thinking about death.  She said her poem was about faith and family.

James Kepple, one of the society’s directors-at-large, commented, “Some of the stuff I heard today, it made an impact on me.  I have tears in my eyes.”

April is National Poetry Month and it has been since the Academy of American Poets instituted it in 1996 to achieve the notoriety of Women’s History Month.

To Celebrate all of the students who performed will also be invited to participate in the New York City High School Wide Poetry Competition sponsored by the New York Browning Society.  Annually this contest reaches out to over 100 Public, Private, and Parochial schools in the New York City Area. The Winners of the contest will be announced on April 30th, and will perform their winning poems at the May Annual Luncheon celebrating Robert Browning’s Birth on May 7th at the National Arts Club. This years featured speaker will be Poet, Paul Muldoon. The contest will be judged by poet’s James Browning Kepple, founder of UndergroundBooks, and Stephen Motika, Publisher of nightboat books, and Program Director of the Poet’s House.