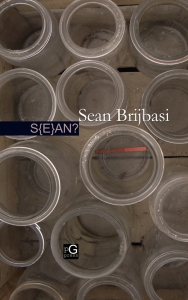 So here we are again dear readers.  As if Sean Brijbasi’s last book “the dictionary of coincidences, volume i (hi)” wasn’t enough to put us off reading for a few years he bring us his semi-self-titled work of fiction “S{E}AN?”.  First things first—I don’t know how to pronounce the title of his new book.  And that’s not a criticism.  That’s just true.

I honestly believe that Brijbasi thinks I liked his last book and that’s why he sent me an advance copy of this new one.  I think that’s what I’ll call his new book for this review since I can’t type the real title of the book and pronounce it in my head at the same time (which drives me fucking crazy).  Yes—this new one is also a stilted, stunted, un-grafted, cacophony of matter.  And by matter I mean matter in the most nebulous form.

The book is organized into 5 sections (actually 7) and we’re supposed to believe there’s a story here about a missing boy.  In fact, Brijbasi writes “the boy is missing”.  Okay we get it.  There’s a missing boy.  The other parts of the book are apparently about the missing boy doing things (like thinking and reading) when he’s older but I can’t be sure.  Was he missing for good when he was a boy or did he return? I don’t know because I only got through half the book.  I did feel sorry for the boy because I kept thinking too bad he didn’t go missing in somebody else’s book.   He would have probably had more fun.  Oh, and before I forget—there’s also a comic strip (go ahead and laugh).

When Brijbasi sent me the advance copy I called him and asked him what the new book was about before I started reading it.  He said he couldn’t talk about it.  He said he didn’t want me to know.  And I thought to myself how am I supposed to read a book if I didn’t already know what it was about?  Or at least have some idea about what to think of it before I read it.  Will it be the “book of the year”?  Will it be “the one book to put on my reading list”?  Will it be the “can’t put-down read of the summer”?  Or the book that “changes the game” for literature?  Has it even been nominated for any fucking awards?  I mean—what the fuck is it?  How am I supposed to read it if I don’t know what it is.

There’s some video that hasn’t gone viral about the fact that Brijbasi and Kundera are releasing books on the same day this year (June 23).  Au contraire.  Kundera’s book has already been out in the world in multiple languages (even those Chinese languages!).  It’s just being released in America on the same day as Brijbasi’s.  And I already know what to think about Kundera’s book.  So when I read it I’ll already know what to expect and can therefore enjoy it which is how people should engage with their art (not that Brijbasi’s new one is art).  Our brains need an on-ramp before they get up to speed.  Or some kind of buffer between ourselves and whatever the hell those artists want us to look at, read, or listen to.  I can’t just read the book.  Just like people can’t just watch a movie without knowing what it’s about first.  Have some fucking consideration.

You see that’s what reading Brijbasi does to me.  I get worked up and before you know it I’m just not myself.